Hello everyone and a warm welcome to Part 1)  of the entries for my weekly: “Fiction in A Flash Challenge” Week #21.

Today I’m featuring contributions from entry 1)By John Howell and Entry 2) My own contribution. 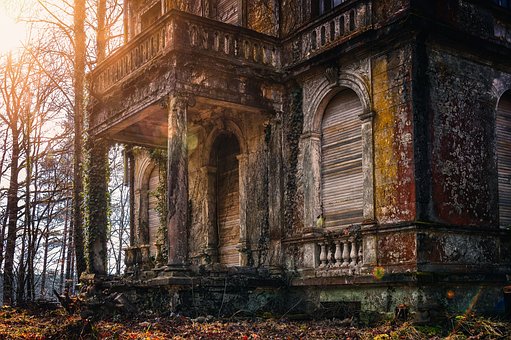 One Line Contribution By John Howell.

“I think this Sherwin Williams Paint color of the month is a little too rustic for me, Ambrose.”

John Howell can be reached here …

“Can’t get there soon enough for my liking. This storm wasn’t forecast. I don’t like driving among all these damned trees when there’s lightning around.”

A shattering clap of thunder shook the car windows. Holly squealed as a bolt of blinding lightning struck a tree just behind them, throwing the burning wood across the road. “Damn it. I hope the realtor is already waiting for us. That tree’s blocking the only access back down to the highway.”

Daniel took a long slow curve and stopped the car suddenly as they reached a clearing. “That’s weird! Firstly, we were told this was a vacant block of land. So, what’s with the old building? And it’s not raining or even wet here. No sign of the storm.”

“I’ve seen it rain on one side of the road but not on the other before. That old house looks amazing.”

“Yeah, I guess.” He took her hand and they walked slowly up to the property.

“Oh my God! It’s really something, isn’t it? You can just feel the history pulsating around you.” Holly let go of his hand and walked up to the shuttered and abandoned mansion. She touched the barricaded door gently. “I want to go inside.”

“We can’t do that, hon. Besides, we don’t want the expense of demolishing a house. Just wait till I speak to that realtor! What a waste of time. His car’s not here yet. I’ll give him a call.” Daniel flipped open his cell, “There’s no damned reception!”

“Who’s gonna say anything? Don’t be such a baby.”

“You shouldn’t let the fact that it’s Halloween spook you. Where’s your sense of adventure? I’m gonna find a way in.”

Daniel watched Holly walk around to the side of the building. She found a door that wasn’t nailed shut, fiddled with the lock and the door swung open. He followed her inside.

The door slammed shut behind them and they were plunged into darkness. The only light came through the cracks and breaks in the shutters. It was colder in here than outside.

Holly moved across to the base of a stairway that curved its way to the second story balcony.

She ran her hands lovingly along the dusty mahogany of the banister, suddenly letting out a yelp of pain. The splinter of wood had gone deep. She gritted her teeth and pulled it out, watching as a few droplets of blood spilled to the wooden floor.

“Did you hurt yourself, hon?” Daniel placed a hand on her shoulder. Holly smiled, “Just a splinter. Come on, let’s take a look around up here.”

Daniel followed for a few paces. “What the hell is that noise?”

“Noise? I don’t hear anything.”

“Listen! There it is again, it’s like the sound of a baby’s heart beating. You know like on one of those ultrasound things?”

Holly shrugged, moved ahead, and walked into another room. Daniel was only three steps behind her, but when he reached the spot where she’d entered … the doorway had vanished. All he found was the solid concrete wall.

“Holly? Holly can you hear me? HOLLY?” He pounded on the wall. “Holly answer me! Where are you?”

A scream came from inside the wall.  “Daniel help me! I can’t breathe in here! The door’s gone and there’s no windows! It’s getting hotter!  Get me out!”

The man frantically pounded on the wall, “It’s no use. I’m gonna see if there’s another way in. Hold on.”

Smoke oozed through the walls and Holly stopped screaming soon after.

Daniel ran toward the ridge line for another hour and was gasping for air and afraid. His cell-phone reception finally registered a few bars and he punched in 911 and was connected to The Raven’s Peak Sheriff’s Office. Deputy Leanne Hollister took the call and turned to the chief. “Got a guy name of Daniel Spencer on the line, he’s not making much sense. Say’s his wife’s gone missing. Inside some house!”

The chief stood and grabbed his hat, “What’s his location?”

The deputy repeated the address she’d been given. She watched in surprise as the chief snorted loudly, replaced his hat on the hook and sat back behind his desk.

“I keep forgettin’ that you’re only new to the area, Deputy. Somebody’s havin’ some Halloween fun with ya, is all. That ol’ mansion was gutted by fire on Halloween forty-years-back. We lost a few local residents in the blaze. The relatives had what little remained of the house demolished. There’s nothin’ but a concrete slab at that location.”

“Chief, you need to take this call!”

“That call we ignored last night. Turns out Daniel Spencer is a Senator’s son. The boy and his wife were meant to have dinner with the family for Halloween. The car’s been found burned out at the location he gave us. They found his phone around a mile from there. It showed this was the last number he called. The US Marshall’s Office is on the phone.”

I wish you all Happy Halloween my friends! 😈

Thanks so much for joining me here today. I look forward to seeing your comments. I will as always featuring each new contribution as I receive them.

Travel, History, Fiction and Dogs, Romania & South Africa ~ For what is wind, but the amassed power of words long ago uttered? (Patricia Furstenberg)