Hello everyone and a warm welcome to PART 4)  of the entries for my weekly: “Fiction in A Flash Challenge” Week #11.

This Contribution by Michele Jones. 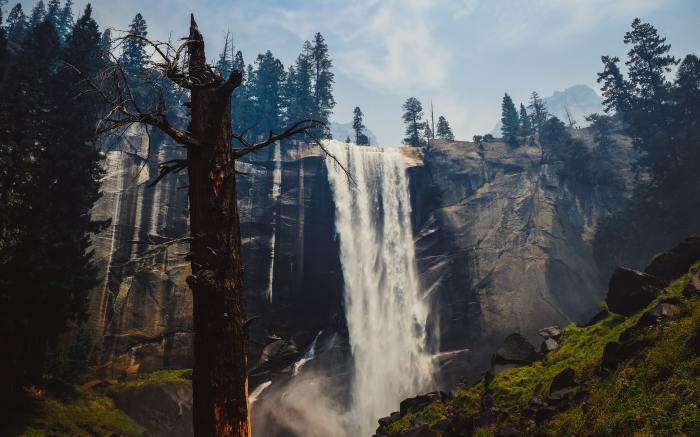 Mike ran ahead of Carl toward the sound of rushing water. He’d always been faster and would be there first. As he darted through the trees, he saw it. The waterfall.

Mike stared at it as it fell from the rock above. Rumors about its existence had been around for centuries, but he didn’t believe them—brushed them off as a myth. But ahead of him, the water flowed, no gushed, from the rocks above. How could this be? What was happening? Who did this? The valley had always been dry. Hell, the entire region barely saw any rain.

He moved closer. The sound of the water roaring in his ears. He didn’t know much, but he knew a water source was needed for a waterfall, but no rivers or oceans were within miles of here. Something wasn’t right. Mike spun around looking for any possible reason for the falls. There wasn’t one and he didn’t believe in magic.

Mike pulled out his phone took several pictures. No one would believe him. This would be his proof. He moved even closer. The mist at the bottom splashed up from the basin and reflected the sunlight in its droplets. Lily would love this. He tried calling but had no signal. Strange. He’d had signal here before. Must be the waterfall messing with it.

He wanted to leave, but the water looked so inviting. Even though the falls splashed up, the pool remained still. No ripples, No splashes. He needed to be the one to change that. He pulled off his shirt, tugged off his jeans, dropped his phone, and dove into the pool.

After he surfaced, he heard it. A voice. He shook his head. His imagination must be playing tricks on him. He heard it again. A woman’s voice. Humming the most beautiful melody he’d ever heard. She must be behind the cascade. Mike swam closer. The humming got louder, but he couldn’t see her.

Something told him he shouldn’t go any closer. But he had to see her. That voice. It was so beautiful. He knew she wanted him. Confused, he treaded water trying to decide. Before going on, he heard his brother screaming and saw him flailing his arms.

Mike shook his head and swam to the edge of the basin, climbing out.

“What the hell are ya doin’? Do you have a death wish?” Carl ran up and yanked him from the basin.

“Aw, I was just cooling off. There’s no reason to be so—”

“Don’t you remember anything about the waterfall? It’s cursed. Now you’re cursed. And so am I. I can’t believe you did this to me.”

“I didn’t do anything. And we’re not cursed.”

“So, you didn’t hear the lady singing? You weren’t swimming to the sound of her voice?”

“Yeah, I heard her. So what. Nothing’s gonna happen.”

“Fool. The lady kills. I can’t believe you don’t remember that.”

“I remember. I just don’t believe it. Watch me.”

Before Carl could grab him, Mike dove in and swam to the cascade. He’d prove everyone wrong. There was absolutely nothing to worry about. He could hear that woman’s voice again. It grew stronger, more inviting. He could also hear Carl screaming at him to come back.

Mike swam behind the cascade. Just as he thought. There was nothing there. He climbed out of the basin and looked for her. He saw no one. Just an old timer myth. As he turned to go back to his brother, she was there. But the waterfall was gone. The ravine—gone.

“You should have listened to your brother. Now you’re mine. For eternity.”

This Contribution by Gwen Plano

When I saw the photo, I imagined flying above the falls and mountains high. I felt the moist breeze and soared in the silence of the trees. My haiku…
​

Gwen Plano can be reached here …

I can be reached here …

Thanks so much for stopping by! I’d love to hear your thoughts.