Hello everyone and a warm welcome to PART 2)  of the entries for my weekly: “Fiction in A Flash Challenge” Week #10. 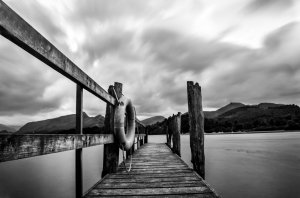 This contribution by Gwen Plano

As I looked at the photo, I imagined dancing on the pier with a lover and then returning at a much later date alone. The image carries sadness for me and the movement of time. I tried to capture those sentiments in my poem.

Gwen may be contacted … here

This Contribution from Mae Clair

Sampson eyed the life preserver before looking to the lake. It seemed like a straight shot. Grab the ring and jump off the end of the pier. Everyone knew the water was deep—all the pamphlets he’d studied said as much—but how bad could it be with the preserver to keep him afloat? He wasn’t a novice. He’d been in rough waters before, and the lake was placid. A little cloudy, but he’d take milky over a rough current any day. Jake, on the other hand, was predictably cautious. More scholar than adventurer. They might be twins, but his brother lacked a sense of adventure.

Sampson fingered the preserver, feeling small imperfections like tiny scars, cut into the surface. How many others had given it a try and failed?

Squaring his shoulders, he shot Jake a sideways glance. “Scared?” Bravado was a familiar friend.

Sixteen-year-olds didn’t need more than one-word answers.  Even so, Sampson considered it prudent to eye the lake a second time. He swept a hand through his long hair, proud of the shoulder-length locks that connected him to the biblical strongman. And like that Sampson of old, he had faith he could prevail.

It was time to prove himself to his parents. His mother, the senator, and his father, a high-profile lawyer who hobnobbed with the jet set. Jake never felt the need. Why should he? Already two years ahead in college, he was the golden child, the favored son. Sampson had little more going for him than gut instinct.

Right now, that intuition told him he could make a name for himself by diving into the lake. Screw it all and take a chance. His name would go down in history as the person who discovered what scientists, conspiracy theorists, and countless tourists had failed to prove.

With a backward glance for Jake, he grabbed the life preserver, bolted to the end of the pier, then jackknifed into the water. It parted on impact, leaving the scarred white ring bobbing on the surface. He forced himself deeper into the cloudy depths, pressure building in his ears, his lungs tightening with each downward thrust of his legs. Icy cold and impossible dark enfolded him. There was no up, no down, his sense of direction obliterated within a few frantic heartbeats.

He’d wanted to prove himself the hero but sensed he’d embraced something fatal. He’d never be able to propel to the surface before cold and gloom sucked the breath from his lungs.

Freaking stupid, a hundred times over.

But then as despair slithered closer, something moved below him. A sinuous shadow that flowed through the water with a flick of its mammoth tail. He barely had time to register the movement before it sent him rocketing toward the surface.

Sampson emerged, spitting water.. He clung to the preserver, limp and exhausted, his heart railroading like a locomotive. How had a simple dive left him so depleted? Insight whispered numerous swimmers and explorers had felt the same draining pull before. He wasn’t the first. Wouldn’t be the last.

A slow smile stretched his lips. Raising a hand, he waved to Jake who raced to the end of the pier, eager to haul him back to dry land.

Sampson no longer cared about proving himself to his famous parents or his Brainiac brother. He’d found far more than he’d searched for—not the fame and fanfare of a celebrity, but the quiet wonder of someone who’d been shown a treasure that deserved to remain a mystery—now, forever, and always.

Mae can be reached here:

Thank you so much for stopping by. Later today I’ll be featuring Part 3 of this week’s entries, contributions by Karen Ingalls and Jan Sikes.