Hello, and welcome to the Cover Reveal of my New Psychological Thriller. 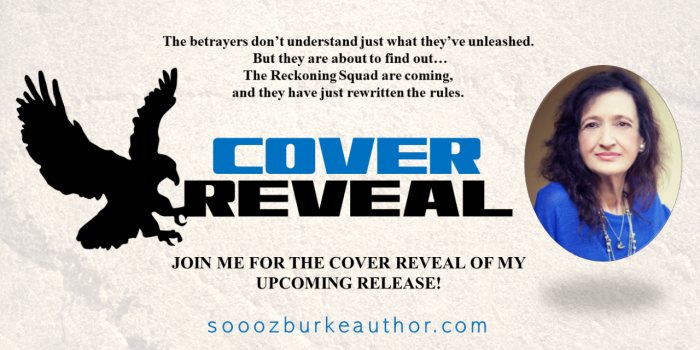 It is such an exciting time for an author when releasing a new book! I would be remiss in not sharing my heartfelt thanks to the marvelous people who gave of their time so readily to beta read my latest book. Their valuable insights helped me enormously when crafting “The Reckoning Squad”

At long last, I’m able to share the cover and blurb for “The Reckoning Squad” my latest Psychological Thriller.

It is NOW available for Pre-Order.

I have many good friends sharing this cover across the blogosphere today and tomorrow, so you’re likely to see it pop up in various places. Thank you to everyone participating in my cover reveal splash, and to everyone dropping by to share in my excitement.   Here’s my new baby . . .

With much gratitude to Eeva Lancaster at The Book Khaleesi for the cover creation.

Cover Created by Eeva Lancaster at The Book Khaleesi

The Reckoning Squad was the new name being whispered in the darkened corridors of the powerful in Washington. The name was whispered with awe, and the whispers grew louder.

Twenty people had been carefully vetted and recruited to undergo specialized training. Training engineered to break them utterly, intended to shatter everything they once believed themselves capable of surviving. Only the best of them made it through the twelve weeks of hell. They now formed a cohesive black-ops unit, known as The Reckoning Squad.

Their facility is breached, and the team’s numbers are decimated. The survivors know that they’re in a fight for their lives. They have been betrayed from within. Trust has now become a rare commodity. They want answers.

But they are about to find out.

The Reckoning Squad are coming, and they have just rewritten the rules.

Here’s an extract from the Prologue.

Chastity Adams checked the time, ran a brush through her long blonde curls and hurriedly grabbed her school books. She shoved them into her backpack and slipped on her gloves. One quick look from her bedroom window was enough to tell her just how windy it was outside. The last of the fall leaves still clung bravely to the branches all the while knowing it was futile. The others swirled in small angry spirals across her backyard. She grabbed her coat, pulled on a beanie, and loosely draped a scarf across her shoulders. Chastity was unaware of how pretty she looked with her long curls falling in a soft curtain around her. Her mind was too busy to cloud it with vanity.

She suddenly recalled a decision she’d made yesterday.

Chastity hurried down the hallway to her brother Nathan’s room and knocked on the door.

Nathan stood looking down at her from his 6ft 3ins, rubbing his eyes and leaning on the wall. “What’s up, squirt?”

Chastity ignored the nickname, she’d be thirteen in a couple of days then she’d ask her big brother to quit using it, “I was just wondering if you had some gloves and maybe a beanie or scarf you don’t ever wear.”

“Why would you need them?”

Chastity flushed a deep shade of pink, “There’s this boy at school, he kinda always looks cold. He’s still wearing the same stuff he was wearing back in June. It’s way too cold now for shorts and a tee-shirt. So, I figured maybe his folks just didn’t have enough money to buy him some warmer stuff, you know? I mean he could have one of mine, but he already gets picked on enough and adding bright girl colored stuff would just make it worse.”

“You off on another one of your missions to save the world, squirt?”

“I’m not! But it just doesn’t seem right that some folks have too much and some folks never have enough. That’s all.”

Her brother looked at her closely and nodded. “Okay. I guess I have some stuff I don’t really need.”

His sister flung her arms around him. “You are the best brother ever! You wouldn’t maybe have an old hoodie as well?”

Nathan knew he’d lose an argument with his kid sister. He had never been able to deny her anything. And the little minx knew it.

His eyes followed her as she left the room with her donated bootie. He tried to shrug off the thought that his friends may start looking at his kid sister a little differently, and soon.

Then he grinned and was comforted by the knowledge that the squirt was capable of laying them out flat on the ground, courtesy of the karate lessons she’d undertaken since the age of five. If she didn’t dissuade them they’d have to come through him. That wasn’t about to happen. This whole big brother thing had suddenly altered in a way he hadn’t anticipated happening quite so soon.

Travis Wilson shivered as he stepped outside and hurriedly locked the front door behind him. The baggy shorts and tee-shirt he was wearing gave him no armor to fight off the cold November wind. He steeled himself to brace it, picked up his violin case and hurried to catch the school bus.

He climbed on and made his way quickly down to the back corner and grabbed the window seat. He spoke to no one and kept his eyes averted, but he couldn’t shut his ears off from hearing the nasty comments from the other kids that sat nearest to him. “You going away to a beach somewhere, freak? Don’t much like your choice of swimwear.”

The guy had secured himself a good laugh with that one.

Then the other comments started. Kids seemed to grow braver when they formed a pack. Travis knew they weren’t all cruel, not normally, but the need they had to belong trashed all over their distaste at what they were doing. Driven by the desire to be considered popular inspired them to be as cruel as they could be. Their words lacerated his already damaged soul and Travis felt his face darken with the shame of it. He didn’t respond either by word or action, knowing they’d soon become bored with their bullying of him and move their spiteful tongues on to some other kid they deemed to be weak and an easy target.

He looked out the window and sighed with relief when he spotted Chastity Adams and her best friends readying to climb onboard at the bus stop. Chastity was different from the rest of them. He always felt a little better about his day when she’d seek him out and give him a smile. He looked across at her then, just as she turned. He knew she had caught the wistful look on his face. She simply smiled across at him and turned back to her chattering best friends.

He caught the smile and burned it into his memory. He would remember it when the darkness descended again. It would help keep him warm.

Purchase The Reckoning Squad on Amazon.com

Again my grateful thanks to the generous folks sharing my Cover reveal with you today.

Hello and welcome to my first Book Review of 2020. “Eventide: (A Hode’s Hill Novel Book 3) by Mae Clair.

A member of the Mystery Writers of America and International Thriller Writers, Mae loves creating character-driven fiction in settings that weave contemporary elements of mystery and suspense with urban legend and folklore. Married to her high school sweetheart, she lives in Pennsylvania, and is passionate about writing, old photographs, a good Maine lobster tail and cats.

The old house near Hode’s Hill, Pennsylvania is a place for Madison Hewitt to start over—to put the trauma of her husband’s murder, and her subsequent breakdown, behind her. She isn’t bothered by a burial plot on the property, or the mysterious, sealed cistern in the basement. Not at first. Even the presence of cold spots and strange odors could be fabrications of her still troubled mind. But how to explain her slashed tires, or the ominous messages that grow ever more threatening?

Convinced the answer lies in the past, Madison delves into the history of the home’s original owners, only to discover the origin of a powerful evil. An entity that may be connected to a series of gruesome attacks that have left police baffled. No matter where she turns—past or present—terror lingers just a step away, spurred on by a twisted obsession that can only be satisfied through death…

⭐️⭐️⭐️⭐️⭐️ This book is a superb way to end this marvelous series. Five Star reading all the way.

Author Mae Clair has the wonderful ability to combine the darkness and secrets of times past with the terrifying occurrences of the present, and she does it seamlessly. I’ve read and loved Books 1 and 2 of this series and this one is such an intensely satisfying conclusion. It can also be easily read as a stand-alone novel.

It’s such a pleasure to read a book from an author who so clearly loves what she is creating.
That talent shines through every paragraph.
Madison Hewitt is struggling to survive the trauma of her recent past, and desperately in search of peace of mind and new beginnings. The character becomes intensely real and made this reader want things to end well for her. She is intensely visual, as is every scene in this book. Author Mae Clair invites you in and takes you on a terrifying journey into the paranormal.  She challenges her creations to give us a reading experience that will have us coming back again and again for more.
This book is a superb way to end this marvelous series. Five Star reading all the way.
Purchase EVENTIDE on AMAZON.COM

Thanks so much for joining me today! Happy New Year and Happy Reading!