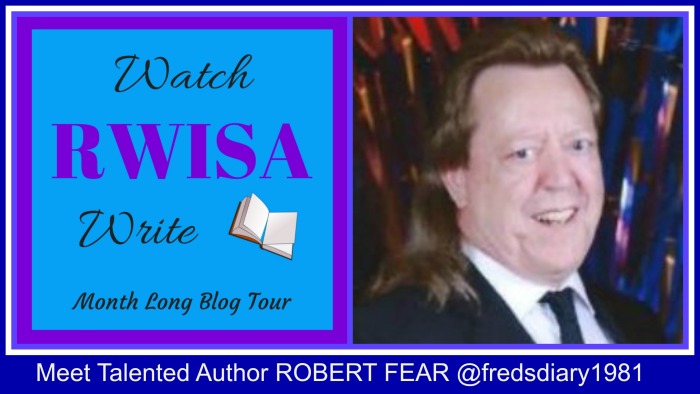 August is Watch RWISA Write month. We will showcase a different author each day. Today, we celebrate author Robert Fear.

Born in Leicester, UK in 1955, Robert’s family moved to Surrey when he was 11. He was educated at Reigate Grammar School. After this he worked at a bank in London for several years before getting the travel bug. Fred, a nickname he got at school, stuck throughout his travels and has remained with him to this day. His travels took him to Ibiza for the summer of 1977, hitch-hiking around Europe in 1978 and the USA and Canada in 1979. During this time he also settled and worked in Germany. Fred’s Diary 1981 was written during the 158 days he spent travelling around Asia.

These days Robert is happily settled in Eastbourne, East Sussex where he lives with his wife and three cats. He works as a software consultant and has been able to combine work with some travel during the past fifteen years, having visited countries as far apart as Australia, Singapore, Ghana and Suriname.

The Fight by Robert Fear

Jose took an immediate dislike to me.

He worked as a waiter at the Panorama hotel near the seafront. I had been there to see Diane, an English girl I met while at work in Grannies Bar. Petite and with short blond hair, she had a delightful personality. She was also a real head-turner.

Diane came to Ibiza on a two-week holiday with her friend, Elaine. It felt fantastic she wanted to spend time with me, but Jose thought his role was to be her protector. He glared at me every time he saw us together

Towards the end of her holiday, Diane spent a night with me and I didn’t get her back to the hotel until breakfast time. Jose was on duty and spotted us outside as we kissed. That just made things worse.

After Diane left for home, things deteriorated. The next Friday evening, as I walked to work, Jose headed towards me with a group of Spanish lads. Their intentions were obvious as they stared, raised their fists and shouted at me across the street.

Before they could catch me I escaped down the steps and into Grannies Bar. Their taunts still rang in my ears as I headed for safety.

Friday nights were always manic. Eager drinkers packed the outside terrace after a day in the sun. A queue of customers had already formed as I dived behind the bar to help serve them.

Four of us; Mick, Pat, Graham and myself, worked that evening shift. Pat was half cut and spent most of the evening with her friends. Mick’s mood was not good as a result, but the three of us got stuck in and served the eager punters.

After six weeks at Grannies, I knew the routine. We served drinks and collected pesetas in quick succession. Spirits were easier to serve than at home. Two ice cubes got thrown into a glass and the vodka, gin or brandy poured until the ice floated. Then the mixer was added.

We could drink behind the bar, provided we remained sober enough to serve. Pat loved her gin and tonics and often wasn’t! Mick, Graham and I had regular supplies of vodka and orange but remained level headed as we rushed around serving eager customers.

Willing female hands often helped out. They collected glasses and washed them up in the sink at the end of the bar. As a reward, they had drinks bought for them and got the chance to pull Graham, myself or even Mick on occasions.

Work finished at 3 am. We headed to El Cortijo for another drink and a dance. A group of Spanish lads hung around near the entrance, but I thought nothing of it. Only later did I found out they were Jose’s friends.

The disco pulsed and the dance floor heaved. Lights from the ‘disco ball’ flashed around scantily clad bodies as they cavorted to the sounds of Abba, Rod Stewart and Status Quo. We caught John’s attention, and he passed us a bottle of San Miguel each.

Graham and Mick met up with two girls they had chatted up in Grannies earlier. Pat had gone back to their villa with her friends so Mick was free for the night. Propped at the bar I sipped my beer and relaxed after a hard night’s work.

By instinct, I spun round to find Jose stood behind me. He glared at me and mouthed something. The music drowned out his words. Jose beckoned for me to come with him. Even though it was obvious he wanted a fight, I went. By the time I got outside it was too late.

My fighting skills were minimal. I had been the object of bullying at school. One lad taunted me with the repeated chant, ‘Freddy’s got a rudimentary organ’, while in the showers. This hurt me and screwed with my teenage sensibilities. I tried to avoid the shower room when he was there.

Two other lads pushed me around and sometimes thumped me. They wanted money, but I had none to give them. One time I gave in to their pressure and stole books for them from a sales exhibition held in the school hall. I never thought of fighting back. I did not know how!

Now I stood on the dusty wasteland twenty yards away from the front entrance of El Cortijo. Jose faced me, surrounded by his group of friends. The atmosphere was menacing and none of my friends were even aware what had happened.

‘So, you silly man, what you say?’ screamed Jose in broken English as he edged towards me.

‘What did I do wrong?’ I retorted.

I sweated in the heat of the August night and he must have sensed my fear.

‘No I didn’t. Diane wanted to be with me you arrogant pig.’

I amazed myself with that response. The drink from earlier in the evening gave me a false sense of courage. Things were dire and soon became worse.

Jose swung his right fist toward my head. I ducked and there was a whoosh of air as he missed.

He turned round and aimed another punch at me. This time he connected and his fist crunched into my jaw. I reeled backwards. Maybe I should have just gone to ground and admitted defeat. This time I fought back.

Well, fought might be too strong a word for it! I stumbled forward and made a dive for his midriff. Jose grabbed me by my shoulders and flung me to the ground.

I spat out a mouthful of dust before I tried to get back up. Then I saw the flying feet of Jose and his mates. It became obvious they wanted to give me a severe beating.

In defence I rolled into as tight a ball as possible with my hands wrapped around my head. The kicks and punches continued and my senses faded as protection against the pain.

Then it stopped. Shouts came from the front door of the disco and the Spanish lads scattered. John, Alan and two others screamed at the top of their voices to get them away from me. A German girl on her way to the disco had seen the scuffle and dived into El Cortijo to get help.

Worried faces peered at me as I uncurled myself. Although bruised and battered there were no broken bones. I hauled myself to my feet. With support from my rescuers, I struggled back to the disco for another drink.

An uneasy truce existed between Jose and me for the rest of the summer.

Thank you for supporting this member along the WATCH “RWISA” WRITE Showcase Tour today!  We ask that if you have enjoyed this member’s writing, to please visit their Author Page on the RWISA site, where you can find more of their writing, along with their contact and social media links, if they’ve turned you into a fan.  WE ask that you also check out their books in the RWISA or RRBC catalogs.  Thanks, again for your support and we hope that you will follow each member along this amazing tour of talent!  Don’t forget to click the link below to learn more about this author: