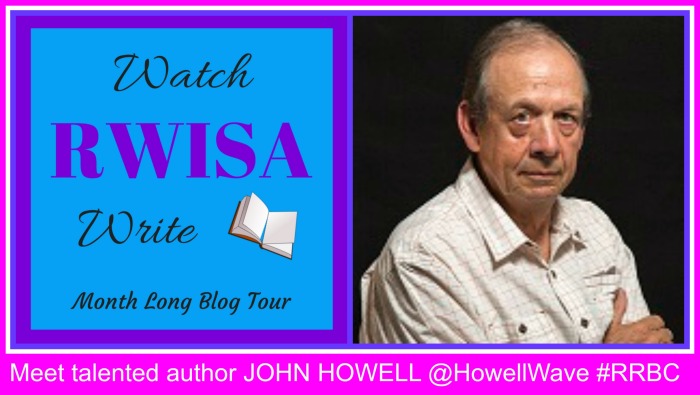 August is Watch RWISA Write month. We will showcase a different author each day. Today, we celebrate author JOHN HOWELL.

John began his writing as a full-time occupation after an extensive business career. His specialty is thriller fiction novels, but John also writes poetry and short stories. His first book, My GRL, introduces the exciting adventures of the book’s central character, John J. Cannon. The second Cannon novel, His Revenge, continues the adventure, while the final book in the trilogy, Our Justice, launched in September 2016 completes the story. All books are available on Amazon in paperback and Kindle editions. John lives in Port Aransas, Texas, with his wife and their spoiled rescue pets.

So, with nothing better to do, I figure I’ll stop at Jerry’s place and grab a couple of drinks and a burger. Usually, I don’t go there on Saturday night since there’s a crapload of amateurs taking up what would be considered prime space. I figure since this is a Friday and close to Saturday, it may be packed, but not as crazy as Saturday. It’s the kind of place where everyone minds their business. They’re there for a good time and will likely not notice me. Even so, I go through the door, stop, and have a look around, trying not to make eye contact. I hope that the ball cap and large coat will keep me from getting noticed. The bar holds a weekday crowd, hanging on each other like they never had a date before. I tighten my eyelids against the smoke and make out four guys near the pool table, and what looks like a couple of girls fetching drinks. I search for a seat beyond the table in the back, but it seems like they’re all taken.

“Yeah, you’re the sports hero who lost all his money. I saw you on TV.”

“Naw, people always say stuff like that. I’m not him, buddy; trust me.”

He gives me a puzzled look but doesn’t want to push it, in case he has it wrong. I turn away and continue to look for a seat.

Straight ahead lies the bar, and it has a place right in the middle. I move in the direction of the empty place and look over to the other side of the room. The tables look full of happy drunks. Buckets of empties line the bar top, and the barmaid’s trying to sell more. She doesn’t have much luck since most of these people just spent their last five bucks on this outing. Upon making it to the stool, I hoist myself up and lean on the bar.

“Evening, Jerry. I’ll have a Gin on the rocks with a water back.”

I like Jerry’s no-nonsense way of handling things. He doesn’t like small talk and gets right to business. My eyes smart from the smoke, and I wonder how Jerry gets away with letting people kill themselves, when clearly, it’s not supposed to be allowed in this kind of establishment.

“Yeah, I would appreciate that. I intend to have another drink and then a burger.”

The guy who thinks he knows me grabs my shoulder from behind. I almost fall off the stool.

“You’re Greg Petros, the big fund manager. I knew I’d seen you on TV. You took a beautiful career in football and ran it into the ground.”

Jerry leans over the bar and lays his hand on the guy’s shoulder. “Move on, my friend. You made a mistake. This guy is nobody. Go sit down and let me buy you a drink.”

“You sure? You called him Greg.”

The guy looks at me one more time but does as Jerry suggests. He believes Jerry’s wrong, but the idea of a free drink lets him get away without losing face.

“Thanks. I didn’t mean for you to have to jump in.”

“No problem. Gimme the high sign when you’re ready for another drink.”

“For you buddy, anything.”

I should mention that Jerry and I go back aways. When I fell on hard times, he became the only one that seemed to give a shit. I take a sip of my drink and wait for the burn in my throat, which signals the good stuff. Here it comes. I take a swig of the water and almost believe life is good. The Gin needs to get to the brain before making any honest judgment.

While I wait for the warmth to go from my stomach to my head, I check out the folks seated on either side of me. They both have their backs turned to me and sit engrossed in some discussion with their neighbor. I figure it’s just as well since I don’t want to go through that old “don’t I know you?” bullshit again. Also, I don’t figure on staying the night, so no use in getting into any long discussions about life.

I look down at my drink and wonder what will happen tomorrow. My daughter Constance wants to come and visit. She lives in New York, and before all hell broke loose, we didn’t see each other often. I missed her so much, and it seemed I had to beg her even to talk on the phone. Now, it’s like she wants to be here every weekend. It’s only an hour’s flight by the shuttle or three by train, so she can come when she wants. I just can’t figure out why she got so clingy. I have my troubles, but it doesn’t have anything to do with her. No use in asking her husband, either. Though a nice enough guy, I always wonder if he has someplace important to go when I visit. He never sits still, and stays busy on the phone or at the computer. He makes a good living, but it seems a person could take an hour to sit and talk. I’d looked forward to some kind of relationship when he and Constance got married. It’ll never happen with him.

When I take another pull at my drink, I notice the burn feels less. It happens every time. First sip initiation, I call it. It’s like the first puff of a cigarette, hits hard then, after, nothing. I decide to let Constance pretty much have the agenda tomorrow. She and I have not had a chance to talk about anything deep for a while. It could just be that she blames me for her mother running off with that guy with the house on the Hudson. He has a title, and the old gal couldn’t resist, but, I think the daughter always felt I should have done something. Her mother’s sleeping with another guy and what the hell can I do about that?

I’ll just go with the flow. If she wants to go out, we will. If she wants to stay in, we can do that, too. I better think about getting some food in the house. Of course, we can always order take out. I need to move on to my drink and let this go. Tomorrow will be what it is. I remember the day she was born. I looked down at her in my arms and promised I would do anything for her. I love her more than life itself, and I hope we can somehow get to the root of whatever’s wrong. She sounded strange on the phone this morning, and I feel helpless to do anything about it. I hope she opens up when she gets here.

For some reason, I feel tired. Perhaps I’ll go ahead and finish my drink. Maybe I’ll just go home and forget the burger. First, though, I’ll just shut my eyes for a minute. My hands feel good when I put my head down.

“Hey, Greg,” Jerry says. I barely hear him. “What’s the matter? You taking a nap? Greg?” I can feel him shake me, but I have no interest in waking up. His voice gets further away, and I think he says, “Oh my God, Sophie, call 911, quick.” Now the room goes silent.

To learn more about John:

Thank you for supporting this member along the WATCH “RWISA“ WRITE Showcase Tour today!  We ask that if you have enjoyed this member’s writing, to please visit their Author Page on the RWISA site, where you can find more of their writing, along with their contact and social media links, if they’ve turned you into a fan.  WE ask that you also check out their books in the RWISA or RRBC catalogs.  Thanks, again for your support and we hope that you will follow each member along this amazing tour of talent!  Don’t forget to click the link below to learn more about this author: