Mae Clair has been chasing myth, monsters and folklore through research and reading since she was a child. In 2013 and 2015, she journeyed to West Virginia to learn more about the legendary Mothman, a creature who factors into her Point Pleasant series of novels.

A member of the Mystery Writers of America and the International Thriller Writers, Mae pens tales of mystery and suspense with a touch of romance. Married to her high school sweetheart, she lives in Pennsylvania and numbers cats, history and exploring old graveyards among her passions.  Look for Mae on her website at MaeClair.net

I’ve written in multiple genres over the years, but most of them contained elements of suspense and mystery. As a kid I was in love with mysteries so it was only natural that theme would worm its way into my writing. With each successive book I’ve written, that element has taken on a larger role, until it’s become my primary focus.

A Desolate Hour has more than one protagonist. Caden Flynn is a practical man forced to adapt to extraordinary circumstances. He’s steady and sure with a strong work ethic, and a willingness to step out of his comfort zone. A sergeant with the local sheriff’s office, he’s suffered multiple tragedies in his past, but that hasn’t stopped him from starting over or opening his mind to the inexplicable and bizarre events that beset Point Pleasant.

Quentin Marsh, my other protagonist, has grown up in an affluent family. A musical prodigy, his life has taken an unexpected turn. By the time he arrives in Point Pleasant, he’s floundering. He goes to the town at the request of his twin sister, but soon becomes embroiled in a murder investigation, an ancient curse, and a vendetta that spans centuries.

Before I was published, I wrote everything from high fantasy and sci-fi, to inspirational and western.

My first two published books were romance—Weathering Rock and Twelfth Sun—a paranormal/time travel, and a contemporary. Both incorporated mysteries, but were more heavily slanted toward romance. Afterward, I moved into romantic suspense with a growing shift to mystery. The change was gradual which allowed me to maintain a number of existing readers while establishing a new brand. I love the mystery/suspense genre and plan on staying entrenched. J

A Desolate Hour is the third and final book of my Point Pleasant series. Each novel is complete, with a finite ending, but there are also events and characters that continue throughout the series. Books 1 and 2 are A Thousand Yesteryears and A Cold Tomorrow.

Yes. I’m very excited to have recently signed a three book contract with my publisher. The Blue Lady of Hode’s Hill is the first book in a new mystery series I’m developing. The plot features two threads—one in the present, the other in the late 1800s. Both tie together and are rooted in the Spiritualism movement of the 19th century. At that time, mediums readily engaged in fraud (sometimes quite skillfully), a few of them even amateur magicians. The research has been fascinating!

I then ask my guests to pose a question to themselves, and their response

7. How long have you been writing?
Since grade school. I know that many writers begin later in life, but for me it’s been a life-long passion. If I go a week without expelling my creative energy in some type of story format, I suffer from withdrawal. I think only another writer truly understands how essential writing is for our well-being!

Sins of the past could destroy all of their futures

For generations, Quentin Marsh’s family has seen its share of tragedy, though he remains skeptical that their misfortunes are tied to a centuries-old curse. But to placate his pregnant sister, Quentin makes the pilgrimage to Point Pleasant, West Virginia, hoping to learn more about the brutal murder of a Shawnee chief in the 1700s. Did one of the Marsh ancestors have a hand in killing Chief Cornstalk—the man who cursed the town with his dying breath?

While historian Sarah Sherman doesn’t believe in curses either, she’s compelled to use her knowledge of Point Pleasant to uncover the long-buried truth. The river town has had its own share of catastrophes, many tied to the legendary Mothman, the winged creature said to haunt the woods. But Quentin’s arrival soon reveals that she may have more of a stake than she realized. It seems that she and Quentin possess eerily similar family heirlooms. And the deeper the two of them dig into the past, the more their search enrages the ancient mystical forces surrounding Point Pleasant. As chaos and destruction start to befall residents, can they beat the clock to break the curse before the Mothman takes his ultimate revenge? . . .

Other titles in the series:
A Cold Tomorrow (Book 2)
A Thousand Yesteryears (Book 1) 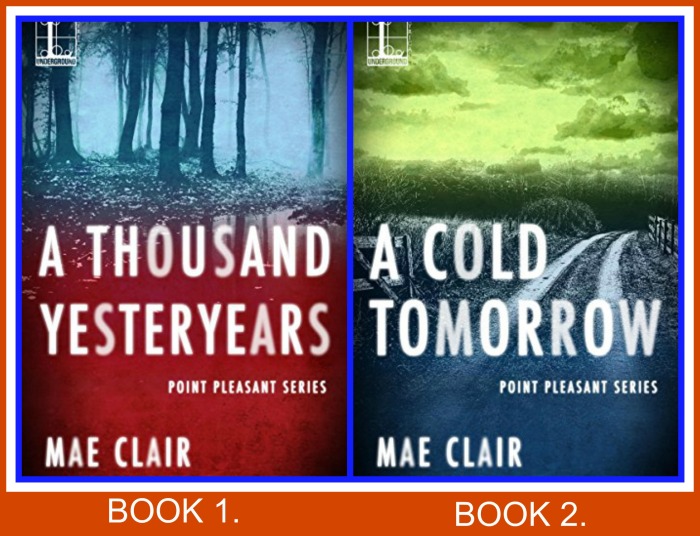 “A THOUSAND YESTERYEARS is masterful, bone-chilling fiction that begins with a real-life tragedy on December 15, 1967: the Silver Bridge collapse in Point Pleasant, West Virginia.  46 people died.   Author Mae Clair has seamlessly woven fact, fiction and creepy urban folklore into one intense thriller.  The gripping story focuses on two witnesses to the disaster—fifteen years later.  Both Eve Parrish and Caden Flynn lost loved ones in the catastrophe and still carry the emotional scars.  After a long absence, Eve returns to Point Pleasant to bury her recently-deceased aunt, face some old ghosts, and reunite with her one-time “impossible-crush,” Caden.  But when Eve begins to investigate her aunt’s death, she’s plunged into danger and a nightmare world where scary urban legends are very real.  Full of suspense, A THOUSAND YESTERYEARS will keep you guessing, gasping and turning the pages for more.”

Mae Clair can be found on the following links.

Thank you to my featured authors this month, Gordon Bickerstaff, John W. Howell and Mae Clair.

From August 12th I will be featuring NON-Fiction- Memoirs.

I appreciate you stopping by and offering your comments and support to all these talented folks.