Patricia A. Guthrie’s “Waterlilies Over My Grave.” Has been selected by the ‘Rave Reviews Book Club’ as one of their “Books of The Month.” For October 2016.

Before I present my review, let’s learn a little more about Patricia. 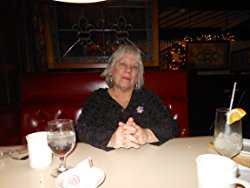 Patricia A. Guthrie, author, dog obedience trainer, horse lover and former singer-music teacher started writing seriously after she retired from teaching. After having several short stories published in Skyline Literary Magazine, Pat’s first novel “In the Arms of the Enemy” was released by Light Sword Publishing in September 2007. Tribute to her “ghost writers”: Four feisty collies who help her write at every opportunity.

A NOTE FROM THE AUTHOR: “Water Lilies Over My Grave” is dedicated to those who have fallen into abusive relationships and have been forced to leave the homes and families they love and start over.

After a nasty divorce, Psychologist, Annabelle O’Brien moves across country to take a job in the resort town of Lake Nager. Her ex-husband psychotic psychiatrist, Duncan Byrne, follows her with deadly intentions. Her only hope is a burn-out and hostile Detective, Mark Driscoll, who she’s recommended take a mandatory vacation. To the horror of both, he’s assigned to protect her.

After a series of attacks threaten her and two ladies who resemble Annie are murdered, a town is held hostage with fear, and Mark and Annie must work together to catch the killer before he catches them.

Water Lilies Over My Grave is a psychological suspense novel about relationships; good ones, bad ones and obsessive ones.

MY REVIEW: 🌟🌟🌟🌟🌟 A terrifyingly insightful look at an all too possible scenario.

Psychological suspense thrillers are one of my favorite genres to read.

It is rare however that I’ve found one that hits the mark of damaged people and relationships as well as author Patricia A. Guthrie has done with ‘Waterlilies Over My Grave’

At times, the characterizations and perceptions were so accurate it felt as though I were reading a memoir.

Meet, Psychologist, Annabelle O’Brien. An attractive woman trying desperately to normalize her life after a dreadful and damaging divorce. She moves across country to a small town, seeking peace and hoping to rebuild the remains of her shattered life.

Her ex-husband has revenge on his mind. Nothing short of Annabelle’s death will satisfy his psychotic need for vengeance.  The character of Duncan Byrne is brilliantly drawn. Delusional, narcissistic and sociopathic with years of training as a Psychiatrist under his belt he unleashes the fear in this reader with his every action.

The death of two women in the small community of Lake Nager has the entire town shaken. Small towns are meant to be safe, and these horrendous murders have the townsfolk drawing their shades and staying indoors after dark. The entire township is affected by the fear.

Annabelle needs help! She finds it in the reluctant and burned out detective assigned to investigate the murders. Mark Driscol resents the fact that Annabelle’s (Annie) assessment of him suggested he be forced to take a mandatory break, after he shoots a perpetrator. The guilt associated with the shooting is eating him alive.

The growing attraction between the two central characters doesn’t ease the tension it simply adds more layers to the already beautifully crafted characters.

The deranged ex-husband (Who I keep visualizing as Anthony Hopkins in his Hannibal Lecter portrayal) remains present in every scene, not physically, but the threat of what he’s capable of doing is palpable.

I hate spoilers in reviews, so I’m not about to tell you more of the storyline. What I will tell you is that this gem of a book is worthy of a read, and a re-read to catch some of the subtlety that this author is very apt at writing. Bravo Patricia.A Guthrie. I will be actively seeking out more of your work.

4 thoughts on “BOOK REVIEW: “Waterlilies Over My Grave.” By Patricia A. Guthrie.”