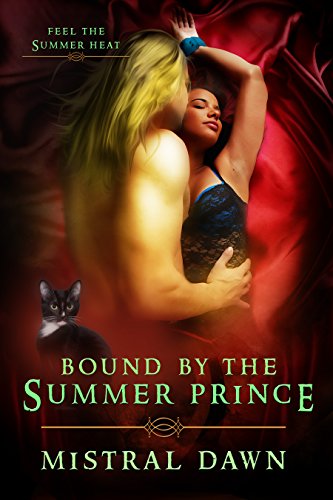 Say Hi to author Mistral Dawn, as I review her book, ”Bound By The Summer Prince (Spellbound Hearts Book 2.)

Mistral Dawn is a thirty-something gal who has lived on both coasts of the US, but somehow never in the middle. She currently resides in the Southeast US with her kitty cats (please spay or neuter! :-)). She has written three full-length novels in the Spellbound Hearts series, Taken By The Huntsman, Bound By The Summer Prince, and Captivated By The Winter King, as well as Intrigue In The Summer Court, a novella in the Spellbound Hearts series.

The Summer Court is in an uproar. The king has just been executed for unpardonable crimes, and the queen is prostrate with grief over his loss. This leaves the Summer kingdom bereft of true leadership; a problem which is compounded by the fact that the laws of Fairie require balance to be maintained by having a male and a female ruler for both Season Courts at all times. Uaine, the Summer prince, is the only one who can put things right, but he is without a mate. Knowing that he must take a bride quickly, for the sake of his people, even though he is struggling with his own feelings of pain and anger over his father’s treachery, he goes for a walk in a forest near the palace to try to clear his head and determine how best to choose a female to rule beside him.

While walking Uaine discovers a human female running loose in Fairie, which is against the most basic tenets of Fae law. Furious at one more problem he must deal with, he takes her prisoner and locks her in the dungeon; only to discover later that she is his soul-mate. The magical bond between them means they are meant to be together forever, but humans can’t feel the magic of Fairie. Will Uaine be able to win her heart and convince her that she can trust him to keep her safe from all the dangers of Fairie…including himself?

Roni is a human con woman and petty thief. Having run afoul of the local crime syndicate in the city where she is staying, she finds herself running for her life. Trouble is no stranger to her, but when she falls through a hole in a wall and finds herself in a world with carnivorous trees and rocks that eat people she realizes she may have found more of it than she can deal with. Rescued/arrested by the prince of the Summer Court, it doesn’t take long for her to formulate a plan to use him to get herself home. Unfortunately for her, she soon finds that her heart, which she had thought long ago turned to stone, has begun to feel the love she has been playing at. Will she be able to overcome a lifetime of caution and allow herself to follow her heart? Can a criminal love a cop?

The characters have layers of complexity that peel away like a Spanish onion leaving their underbelly exposed and vulnerable.

There is nothing two dimensional in this work, and Author Mistral Dawn has crafted beautifully drawn characterizations.

Let’s explore Roni. Roni is street-smart, savvy, and prides herself on her ability to always remain one step ahead of anyone else in her dark life. She is uncompromisingly human, and therefore fallible. Her underestimation of the people she has conned has resulted in her running for her life, and tasting the fear that being pursued carries with it.

Author Mistral Dawn cleverly draws us into this character, and because of the hidden depths of pain, and Roni’s refusal to acknowledge her ability to really feel the love she normally uses as a weapon, I find myself liking her, and ultimately cheering for her to not only survive the Fae world she stumbles into, but to find the magic that will turn her cold heart into a warm and beating thing.

The Summer Prince, Uaine, is Fae. A man struggling to come to terms with the betrayal of his father the King who paid the ultimate price of execution for his acts. Uaine worries for his mother as her grief overwhelms her, and although he knows he must marry in order to take his place as king, his heart is heavy, he wants and needs much more than the females offering themselves to him. He craves a woman who will see beyond the trappings of Royalty and share the depth of love he is capable of feeling.

The story develops well, and we are given deeper insights into the characters, and the land they are in.

I don’t want to introduce spoilers, the book deserves to be read.

I will recommend Bound by The Summer Prince to everyone that enjoys a well-crafted, fast-paced and thoroughly enjoyable reading experience. I will now be seeking out other works from Author Mistral Dawn.

Purchase Bound By The Summer Prince here on Amazon