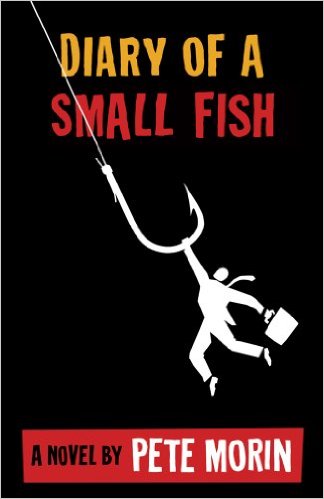 I’m delighted to have Author Pete Morin as my guest today.

While I have accepted Suzanna’s kind invitation to contribute to her “Relevance of Sex in Literature” series, I confess I feel like quite an impostor. My first novel has all of three sex scenes, two of them less than half a page, and the other three novels have none at all.

The sex scenes in my novel(s) aren’t particularly prominent or the principal foci of the plots, but they have a purpose. If they didn’t, they wouldn’t belong any more than two pages of prose to a man tying his shoes (which I’m sure any thriller writer can build into a yuge plot point).

So then, armed with this paucity of “experience” writing sex in literature, I shall dispense with essaying on the topic at large, and just focus on the one and only “important” sex scene in any of my novels. I’m not sure what the definition of “relevance” is for this analysis, so I’ll leave it to Sooz and y’all to opine.

The “big sex scene” in Diary of a Small Fish involves Paul Forte rolling around on a canvassed floor, smooshing edible body paint all over a human canvas, the alluring fine artist named Shannon McGonigle. Still heartbroken over his divorce from a woman he still loves, he had become infatuated with Shannon, but for months they had played a frustrating, silent dance you might call Fear of Rejection.

They both carry deep emotional scars, they cannot deny their mutual attraction, but they are terrified of being hurt again. Shannon has an especially thick shell against intimacy, because she blames herself for her mother’s death: she was servicing her boyfriend when her mother fell out of bed while under her “care.”

On the even of his trial for a crime he doesn’t think he committed, he can contain himself no longer. Impulsively, he diverts his car from its intended route and races to her place, where he finds her in the middle of her current project: painting a wreath of thorns onto a wooden toilet seat, trompe l’oeil style. A brutal defense against intimacy.
____

“There’s something I need to tell you,” I said, trying to be casual about it.

“Something I’ve wanted to tell you for some time.” I said, still looking at the commode, examining the wooden seat as she continued to dab away. “Are those thorns you’re painting on a toilet seat?”

“Diabolical, isn’t it,” she said, her eyebrows dancing.

“I’ll say. Makes me flinch just looking at it.”

She snickered. “Yah, I know. So what’s the big news?” She stood, her brush hand tilted back, the other at her waist, like she could have been holding a cocktail glass at Tanglewood, except for the spattered smock and denim capris.

“I have to tell you that I am profoundly and desperately in love with you, and if you don’t make love to me right here, right now, I will die.” I tried very much to say this as though I was giving a five-day forecast, but I am just not that smooth, so I choked it up a bit. This was a big risk, I realized at that moment, and no sooner had I said it than I feared I might have blundered badly.

At this point, I would hope that, however the scene unfolds, there is enough of an emotional charge to carry anything that happens.

She kept her pose, looking like a Nieman Marcus mannequin, except her eyes narrowed, like she was discerning my earnestness and might rate it. Inscrutable. I really thought I might throw up, or perhaps that she would hit me.

Almost imperceptibly, her chin quivered. Then the tremble spread into her lower lip and up to her eyes, and a tremulous whimper escaped from her throat.

“If you don’t say something, I’m going to ruin this toilet art of yours.”

She tossed her brush on the floor and jumped on me like I was a rope swing at the summer lake, wrapping her legs around my waist, clutching me in a bear hug, burying her face in my neck. And I held her so tight I was afraid I might break her ribs, if she didn’t break my back first. At long last, her arms gave out about the same time as my back, and her feet slid to the floor. Her arms came from around my neck, and she grabbed two fistfuls of shirt collar and pull my face close to hers.

“Tell me it’s okay,” she demanded.

“Tell me…” yanking both fists, “it’s okay…” tugging again, “to make love to you…” pushing her forehead against mine, “and nobody will die.” Her face went back to my neck and her arms around me.

“It’s okay. You’re safe,” I whispered. What else could I say? It was the truth.

She drew her face away from me, hands flat against my chest. “Prove it.”

What was a man to do?

What follows involves plenty of description (I suppose), but it’s nothing to what has set it up. Without the set-up, it’s just another sex scene (entertaining as it might be). And worse, it is a sex scene that depicts the mythical perfect first-time lovemaking. In the romance genre, that might be trite.

And sex is quite possibly the purest form of communication humans are capable of (not that they always deliver). Prostrating himself on a canvas (his lover’s turf), allowing himself to be doused in paint, to be colored by her, was a sort of re-baptism, where he let go of all his baggage and trusted the outcome. And the result was “a synchronicity so perfect that I could not tell her shuddering body or soul from my own, and we fused together from head to foot in a Technicolor embrace so tight, so full of spiritual release that I feared my heart would burst from my chest.”

Before this point, we felt (I hope) we could trust Paul, but now, we’re full on rooting for the pair together. They have bared their most vulnerable souls to us, and we want to reward them for it.

Such is my advocacy for one semi-graphic sex scene. What about a more frivolous incident?

As I wrote the love story of Paul and Shannon, at one point, they took over the narrative and showed me how sex is used to end an argument. In a scene they virtually dictated to me (one I definitely did not see coming), as Paul faces possible jail time, he tells Shannon he has refused help of a morally ambiguous nature. A hardened inner city survivor, Shannon is angry that he would risk his freedom at any cost, but she’s not going to let it spoil a good dinner:
____
I was pretty steamed and ready to argue. I guess she saw that on my face, because she set her flute down and came over to me, hooked her fingers into my belt loops and yanked my hips into hers with a hard thump. I tried to resist, but she lowered her eyelids to half-mast, and looked up at me with her sleepy, sexy leer.

“Do you know how sexy you look in that suit?”

She stepped away a few feet and slowly gazed from my head to toes. She stopped at my waist, and noticed the effect of her little seduction. Her leer was joined by a dirty grin as she stepped up and ran her hand over the growing bulge, and whispered in my ear, “Let’s be careful you don’t stain the material.”

At that instant, I began to wonder if it was fair that womankind had at their disposal such an efficient and ruthless means of ending an argument to their advantage. My effort to weigh the equities in this were soon overrun by the notion of just how ridiculous a man looks with his suit pants and boxers around his ankles and his full-masted erection poking out from under his pinpoint oxford dress shirt.

But Shannon is a resourceful woman, and she distracted me further with a deft raising of skirt and removal of underwear, and we used the prep table for a wholly unintended function which I suspect debilitated the structural soundness of its legs.
After such an experience, it is impossible to eat pasta and duck naked without giggling like a fool, and there is always the sense that the taste is just a little different.

I suppose one of the reasons there wasn’t more sex in Small Fish is that, once it had established the foundation for Paul and Shannon, there was no further utility in it. There may be brief, fleeting reminders of their attraction, the ever-present “thrill” doesn’t dim, but it doesn’t have to be slathered all over the pages of a legal thriller. As Paul and Shannon grew over the years (in two more novels), they just didn’t seem to feel it necessary to show off. I think they’re confident that their sexual attraction is perfectly evident without it. Perhaps they also reminded me that I was writing CRIME novels, not romances!

For pure power, lust may be the most potent of human urges/emotions/motivations. Love (romantic) would not be, because it is so frequently overpowered by anger, insecurity, jealousy, selfishness…and lust. Love requires selflessness, lust is the opposite. Lust ruins marriages, careers, families. It is primal and insistent. It requires morals and prudence to resist, two traits increasingly low on the evolutionary scale. It is a rich field to harvest.

Sex will always be relevant in literature because it is ever-present in the human condition, and because its (successful) employment as literary themes adds a complexity to both plot and character that readers can relate to on a visceral level. We do not know what it’s like to be hunted by a serial killer, imprisoned unlawfully, beaten by Russian gang members. We do know (hopefully!) what it’s like to be overcome by sexual urges.